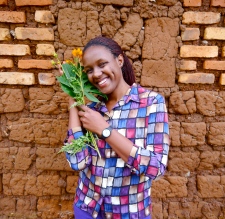 I grew up in Kigali but I was born in Butare, a University City in southern Rwanda. I grew up during a very challenging period because in my early childhood, Rwanda experienced one of the worst holocausts of our century. I grew up in a society torn by this division which engendered a profound mistrust among its children. But this doesn’t include the fact that I have known the insouciance and innocence of a childhood, children’s plays and oral stories told by the elders.

I grew up in a family of three girls and one boy. My father, though highly educated and very smart, was like the majority of African men who believe that women must play a secondary role in society. He was constantly recalling this. But my mother, a very emancipated woman, always whispered the contrary in our ears. At the same time, whenever something was wrong at home, my father would say, “What else can women do? My children, don’t be like your mother.” These messages frustrated me a lot and I grew up asking my mother all the time if my father was proud of having three girls. I would insistently say, “I’m quite sure that Dad would be more proud if he had three boys and one girl.”

My mother always reminded me how much our father loves us ever since we were small babies (which is true), but there were a lot of pressures from society and culture. Until now, I’m convinced that a Rwandan father is happier when he begets more boys than girls and not the other way around. They always say, “We need at least one baby boy!”

My Dreams as a Young Girl

To be honest, I don’t remember most of my dreams from when I was a young girl. Both of my parents have university degrees. I never dreamed to be educated because it was so obvious that I would go to school. I was very brilliant in primary school since I was imitating my mother to speak “good French!”

But I think that I dreamed of being beautiful. There is one particular dream that I clearly remember. It was 1998 and I was 10 years old. Rwanda had not yet recovered from the 1994 aftereffects and living conditions were still precarious. My parents were employed but earned a low income. Whenever it rained, I would wash my feet and sit on the couch, my small body covered by a warm blanket. My dream at that time was to have a cup of hot milk with bread and watch cartoons on TV during the rain. I hated when my feet touched the mud.

I was born in a wealthy family that faced poverty and recovered from it. I’m grateful because this situation helped me to learn the meaning of “I have learned to give not because I have too much but because I’ve known the feeling of not having enough.”

My prevalent dream is to write stories, novels about girls’ and women’s empowerment, stories that restore dignity of people experiencing destitution. There are so many injustices in the world that drive me crazy, but the change that I want to be a part of is the one of young girls who grow up in rural areas. Girls who did not have access to studies and who sometimes think that their lives belong to their fathers and then their husbands. I wish to help these girls access informal employment which will generate revenue. With some money in their pocket, one can afford independence that leads to real self-empowerment.

My message for future girls in my village, city, town & place of employment:

To be a girl is a blessing. We are beautiful, kind, resilient, wise, and we are ABLE. Strive to move forward and dream big even when it’s not easy in places like Africa but it is possible. We can do tremendous things; we can achieve our dreams; we can change the world. Fight for your independence. Work hard to earn your life, remove from your mind the idea that a man will sponsor your expenses. We all have dreams but few people work hard enough to achieve them.

Don’t believe in all modern theories; there are some that are irrelevant. For example, don’t misunderstand gender equity. If the modern society grants us this right as female, this doesn’t mean insolence and arrogance. It’s a chance for us to show that we are worth it. Respect your male peers because we are equal and we complement each other. Find the good balance between modernism and culture. Africa has one of the best cultures in the world. Distinguish what is relevant to you and keep it but don’t turn down all of your culture to comply with the western world. Don’t lose your African roots.

We are marvelous. YOU are marvelous. Love everyone but most of all, learn how to love yourself, to be confident and to trust your feminine instinct inside. I encourage you to read a lot because knowledge is power. If you and I are a divided society, don’t follow that trend because it’s easier for you. Be blind to your differences- your heart should not separate people. Choose your friends according to their values and not their family, tribe, ethnic group, race, or wealth. You can learn this wisdom from reading Romans 12 of the Holy Bible which ends by: “Be not overcome with evil, but overcome evil with good.”

I have ended up realizing that my mother has influenced the empowered girl that I am today because she has spent her entire career fighting for the rights of those in poverty. But I’m always inspired by the look of a child whose young life is impacted by poverty.

“I decided to hold my head high, put my shoulders back, and suffer with dignity: I would give every woman and girl reasons to be proud and never regret being educated, successful, and talented. What I have is something to celebrate and not to ridicule or dishonor.” – Wangari Muta Mathaai, Unbowed 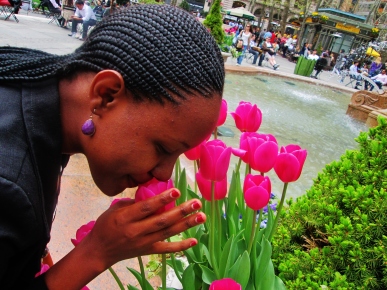